After a restless night of sleep I woke early this morning.  I packed up, ate breakfast and was out front waiting for the dive bus by 7:30.  The bus arrived at 7:45, I climbed aboard and we took off for the dive center.

During the ride to the dive center I met another diver named Ramiro.  Ramiro was from Buenos Aires, Argentina.  I immediately began a conversation with him as Argentina, and more specifically Patagonia, is #2 on my bucket-list of travel destinations (#1 is base camp of Mt. Everest).  Ramiro is a corporate lawyer who works for John Deere. He works in M&A (mergers and acquisitions) and said that he travels to the US frequently, usually NYC. Although I would estimate he was only in his late 20’s/early 30’s it sounded like he has had a very successful career.  He was in Australia for only 2 weeks but wanted to dive the Great Barrier Reef….so here is was.
As mentioned in a previous post the dive center I had chosen was Deep Sea Divers Den (see Day 52 post for more information on the dive center and the dive information).  After a short ride we arrived at the dive center (along with 3 other vans with divers) and went inside.   Each person had to sign in, show our dive certification cards and verify our dive package and payment. Once this was complete we loaded back into the vans for a 10 minute drive to the port where we made our way to the high speed “day boat” (Sea Quest) for the 1.5 hour trip out to the reef…. 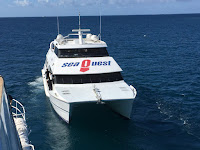 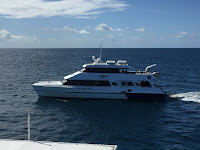 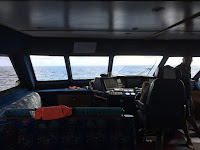 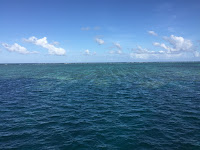 During our ride we broke up into three groups; those previously certified, those getting their certifications and snorkelers.  There were probably 50-60 people on the boat and about 10 certified divers.  The dive team gave us the information for the first dive (site geography, dive rules (time/return bars/etc)), and gave each of us a number.  They then broke us into 2 teams and we chose our dive “buddy” (you never dive alone).

After that we went to the dive deck, grabbed a wet suit, fins, mask and found our dive equipment (based on the number we had been given).  Since I know most people reading this have never dove (dove, dived, have doven 🙂 I’ll take a minute and tell you about the equipment.  The typical dive equipment consists of a tank (duh), a BCD or buoyancy compensator device, a regulator (connects to the tank (stage 1) and delivers air to your mouth (stage 2 – primary & alternate), depth gauge, dive computer, weights, mask and fins….. 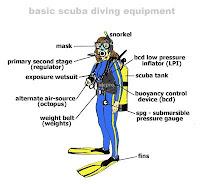 We arrived at the first dive site, Norman Reef (Google, Images), around 10 AM…..

Once we arrived things moved very fast. The certified divers are usually the first to go in so we were in the water in just a couple of minutes.  Now here is where the fun begins…….usually.

Before I continue I need to provide a little background information…..about 2 days before I left for Cairns I started feeling like I might be getting a head cold.  It’s a common diving recommendation that you do not dive if you have a head cold.  This is due to the potential difficulties of equalizing your ears as you decent and ascend.  So this absolutely could not have happened at a worse time since I had already booked, and paid, for 3 days at sea on a dive boat!

So I took a lot of vitamin C, echinacea, garlic, zinc and pretty much anything I could think of to try and keep from getting sick and it definitely helped. By the time I arrived in Cairns I could tell I had a little something but it wasn’t bad. Since I had already paid for the dive trip I decided to go and told myself if I had any issues equalizing my ears I would abort the dive and snorkel instead.

So now, we’re in the water for our first dive and we start down.  I get a few feet down and can’t get my right ear to equalize.  So I come back up and try two more times but still can’t get it.  The other divers in my group descended and were waiting, so rather than hold them up (since it wasn’t looking like I was going to get it) I decided to surface and sit this one out.  In 16 years of diving this was the first time I ever had to sit out a dive.  I was bummed but I didn’t want to push it.  I did some snorkeling and returned to the boat.

The next dive was scheduled an hour later.  I wanted to give it another a try and this time I was able to descend and equalize both ears with no issues…great!  Diving the Great Barrier Reef had always been on my diving bucket-list so I was excited to finally be doing it.  It was a good dive.  The colors of the coral on the reef were amazing and the variety of fish and marine life was equally amazing.

After the dive we had lunch and the folks who were doing the live-a-board (about 10 of us) transferred to a larger boat called the Ocean Quest…. 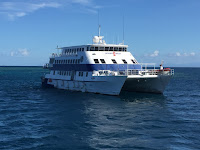 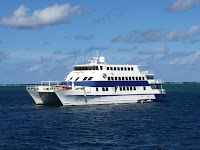 Once we were aboard the Ocean Quest we received an orientation for the boat and were assigned our cabins.  As they were going through the cabin assignments they mistakenly had me and a girl who had also transferred over listed as a couple and assigned to the same room.  They said, “you’re not a couple” and we said, “we just met about 10 minutes ago”.  (ha ha)  So they left me in the first assigned room and moved her to a different room. It actually ended up working out great as I had paid for a double occupancy cabin but, because of their mix up, ended up having a room to myself the first night. 🙂 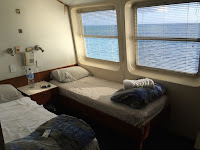 After checking out the boat I took a nap and got ready for dinner.  During dinner I met a couple of guys from Belgium and started a good conversation.  After dinner we had about an hour to hangout and watch the sunset…… 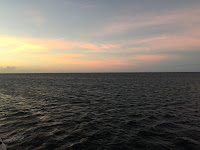 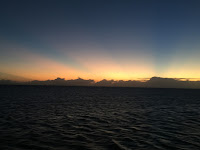 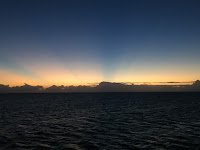 Our last dive of the day was a night dive.  In all my years of diving I had never done a night dive so I was pretty excited.  My excitement increased as I stood on the upper deck at the back of the boat and watched all the fish….and sharks, swimming under the lights around the dive platform (where we dove from)…….(the pictures aren’t the best as it was dark but you can clearly make out the sharks) 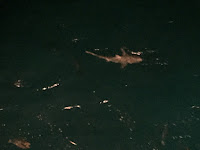 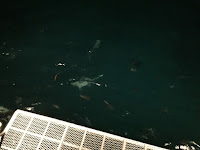 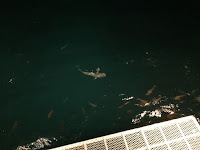 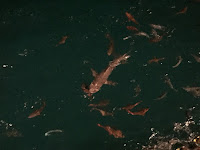 The night dive was pretty cool.  Many fish and marine animals are nocturnal so it’s interesting to see the different varieties at night.  Oh, and in case you are wondering the answer is “Yes”…..I do still have all of my appendages.  ha ha

When we returned to the boat we had a visitor who I think was probably a regular on this boat as he/she had no intention of moving and was definitely not afraid of us.  It was funny listening to him/her…..he/she never moved….. 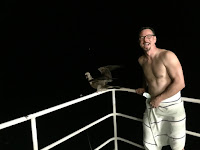 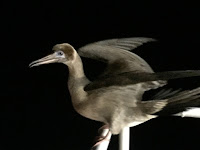 After we got cleaned up and changed my Belgium friends and I sat on the back deck of the boat and continued our conversation from dinner.  We had a great conversation about everything you can imagine (our countries, our families, travel, politics, religion, relationships and on and on).  We ended up talking for almost 3 hours. I know we all wanted to continue the conversation but we reluctantly called it a night around 1 as we had a full day of diving tomorrow….uh, later today.  🙂