Today was a designated travel day.  Although it was a very busy day for me, it was a very “blah” day on the “adventure scale”.  🙂

The place I stayed in Auckland was only 15 minutes from the airport and my flight did not leave until 12:25 so I took my time taking a shower, returning the car, checking in, eating brunch and hanging out at the gate.  For probably the first time I can recall I was actually early arriving at my gate so I sat peacefully and sipped a flat white coffee.  And my “reward” for arriving early…..the flight was late! ha ha.  I just had to laugh.
The 1:20 flight on JetStar back to Christchurch was smooth and we arrived on time despite leaving late.  I collected my bag and checked in with Emirates for my next flight to Sydney.
The 3:30 hour flight over the Tasman sea was good and we arrived in Sydney on schedule. I collected my bag and caught the train to Wynyard station in the CBD.  I ran to the bus terminal and caught my bus just as it was leaving (there was another in 30 minutes but why wait).  It’s a one hour bus ride to Mona Vale.  When I arrived a walked 5 minutes to the Woolworths, contacted Rick who said he would come pick me up, bought some breakfast food, and rode home with Rick.
My “view” for the day….. 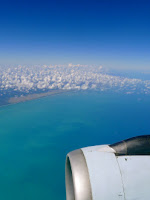 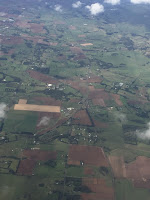 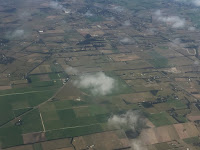 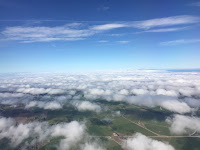 So after one rental car, two planes, one train, one bus, one walk and one ride with Rick I was back at my home base.  As I said in the beginning, a busy day for sure but not a very high on the “adventure  scale”.  Well, at least Alaska was happy I was back (ha ha, not really).