I woke this morning in Taupo wishing I had more time to spend here.  Taupo (Google, Web) is a gateway town to many outdoor activities and the volcanic national parks to the south.  It sits on the banks of Lake Taupo, a volcanic caldera (Wiki).  Dave told me the previous evening that the lake is filled with many thermals on the bottom and there is quite a bit of seismic activity in the area.

I also wished I had more time to spend with my hosts and had another brief, but pleasant, conversation with Dave (Sheryl was at work) over breakfast. But I had to catch a flight in Auckland tomorrow morning so I said goodbye to Dave and headed out.
My plan for the day was to take my time and do the 3 hour drive to Auckland this morning and then do a brief tour around Auckland in the afternoon.  Just outside of Taupo I stopped at Huka Falls (Google, Web, Images).  Huka Falls is on the Waikato River that drains Lake Taupo.  It’s famous for the volume of water that passed through a narrow canyon and not the height of the falls. The other thing you notice (aside from the volume) is the beautiful ice blue water color.  It was very pretty….. 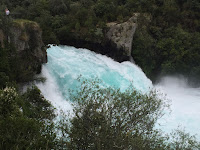 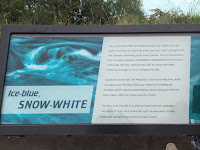 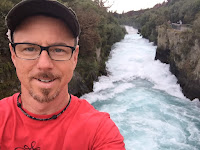 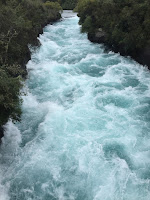 I got back to the car just before it began to rain and it rained off and on for the next 3 hours as I drove to Auckland. About 20 miles from Auckland the weather cleared a bit so I drove into the city to have a look around.

Auckland (Google, Web, Wiki, Images) is the most populous city in New Zealand (32% of New Zealand’s population is in the greater Auckland area).  The CBD is situated between two large bays and the geography in the area has been primarily shaped by volcanic activity with some 48 volcano’s (all currently dormant) in the Auckland area (Web).

Before arriving in Auckland I had communicated with my Airbnb hosts and asked for recommendations on what I should try and see in one afternoon.  They suggested I visit  Mount Eden for a good view of the city and Viaduct Harbour for a taste of Auckland trendy lifestyle.  So my first stop was Mount Eden (hey, it has “mount” in it’s name….where do you think I’m going first, ha ha). Mount Eden is a dormant volcano that was formed 20,000 – 30,000 years ago.  It’s located just outside of Auckland CBD and is the highest volcano in the Auckland area so it offers great views of the city and surrounding harbors…. 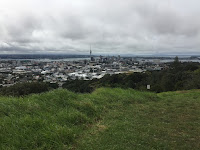 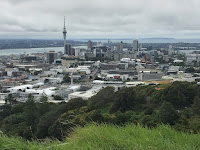 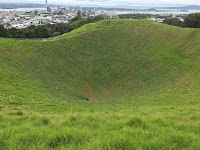 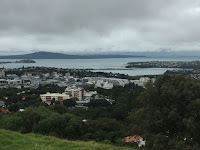 After walking around the park for about an hour or so I decided to try and make my way down to Viaduct Harbour (this is how they spell harbor in this part of the world).

Viaduct Harbour (Google, Web, Wiki, Images) is an upscale residential, commercial and entertainment district with lots of trendy restaurants, bars and shopping.  It’s kind of like the Inner Harbor at Baltimore only bigger and with many more mega yachts.

Unfortunately, while I was making my way down to the Viaduct area from one side an enormous black cloud was making it’s way there from the other side and just minutes after I arrived the sky opened up and it began to pour. I drove around, in the rain, checking things out and looking for a place to park but found nothing.  It looked like a great/fun area to explore, especially on St. Paddy’s day, but the rain showed no sign of easing up, it was around 5 and according to Google I was now 45 minutes from my room for the evening. So I decided since it was raining and I was planning to “celebrate” St. Paddy with a couple of pints I would head out of town and find a place closer to my accommodations.

I arrived at my place for the evening, met my hosts, got settled in, changed clothes and headed to a restaurant/pub that my hosts suggested called The Zookeepers Son.  This turned out to be a good call as they had live acoustic music (which of course I LoVe) and a good atmosphere.  I sat down and looked over the menu and saw what else but a “Philly Steak Sandwich”.  It sounded good so of course I had to try it.  While I was waiting for my meal a middle aged couple was seated next to me.  After some time the lady got up (I assume to go to the lady’s room) and after a few minutes the gentleman asked where I was from.  His name was Graham and his wife’s name was Nicky.  We talked for a couple of minutes until our food arrived.

As for the “Philly Steak Sandwich” (as per the menu) it had, “48-hour sous vide brisket, mushrooms, onion, green pepper and Swiss cheese”.  Although it was not like a traditional Philly Cheesesteak it was very tasty and I enjoyed it quite a bit. 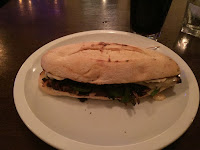 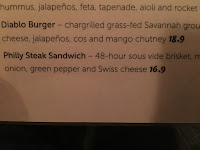 After I finished eating Graham and Nicky asked me “the question”….the same question that I have literally been asked by 99% of every non-US person I have met on this trip…..”what do you think about Donald Trump”.

Now, I want to preface this by saying that I know politics can stir up the emotions and I DO NOT want to turn this into a political forum.  I am not going to share my political opinions or thoughts in this blog but only the facts of what I have experienced and heard from those I have spoken with over the past 2 months….

During this trip I’ve had the opportunity to have many great conversations with many people from all over the world.  I’ve not only spoken with many people from Australia and New Zealand but many from different countries in Europe, Canada, other parts of Asia and even South America.  Almost without exception each of them have asked me about American politics and especially Donald Trump.  What I can tell you, based strictly on the facts of my experience, is the world is very interested in this election and very concerned about Donald Trump.  I know first hand that he is getting a lot of attention in the world’s media as I’ve seen several news casts and newspaper articles about him and/or the election.  As a matter of fact, this was on the wall in the restroom at the restaurant that night…. 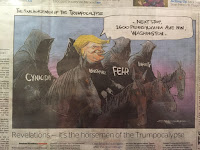 Again, I do not wish to get into a political debate or to share political opinions or perspectives.  I only share this as it relates to the conversation this evening and to say that the world is watching this election very closely.

Graham, Nicky and I ended up sitting there for almost 2 hours talking about many other things including travel, music, family, relationships and New Zealand politics.  🙂  I thoroughly enjoyed our conversation and hated to see it end.  As our time together was winding down Graham reached over, grabbed my check and abruptly got up and walked away.  I tried to stop him but he would have none of it.  When he returned, from paying our bills, he told me I was a guest in their country and he was happy to do it.  I told him that certainly was not necessary but that I appreciated it very much.

What a fantastic way to end my time in this fantastic country!  I’ve met so many great people and seen so many amazing things.  New Zealand was everything I thought it would be and more and it is absolutely staying on my “to do” list as I WILL be back here someday!