I woke this morning in Owhango New Zealand…..about 10 miles from nowhere NZ. 🙂  The area is remote with only several national parks and forests surrounding it.  Although I was in the middle of nowhere, I was precisely where I meant to be for today’s journey…..

My accommodations for the night were interesting…..I slept in a strangers driveway. 🙂  Maybe I should elaborate…..it was an Airbnb for a small “Retro 1977 caravan” parked in their driveway.  It was the area I wanted, had everything I needed (a bed mostly) and the price was right, so it fit the bill just fine.  It was just kind of funny sleeping in someone’s camper in their driveway. I guess it was better than “sleeping in a van down by the river” (who knows this?).  🙂 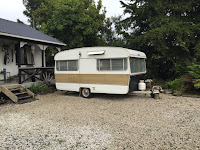 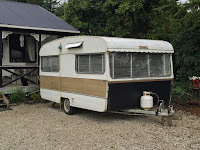 After making/eating breakfast I set out for my destination for the day, Tongariro National Park, about 30 minutes away.  Unfortunately the weather forecast for the day was rain but although it was very cloudy, luckily it was not raining.

After about 20 minutes of driving the clouds moved away just enough for me to get the first look at why I came to this remote area on the north island…..Mount Ngauruhoe better known as “Mount Doom” in the LOTR movies….. 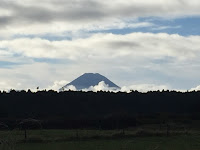 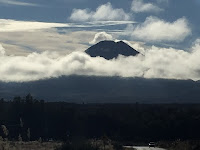 Where the south island of New Zealand is well known for the earthquake activity (see Day 29 post) the north island is known for volcanoes and geothermal activity (see Day 42 post).  Mount Ngauruhoe (Google, Wiki, Web, Images) is one of New Zealand’s most active stratovolcanoes.  It has the traditional volcano shaped cone and at over 7500′ can be seen for many miles. It is part of a string of active volcanoes in the Tongariro National Park and lies between Mount Tongariro to the north and Mount Ruapehu to the south.  My goal for the day was to hike to the top of Mount Ngauruhoe.

I arrived at the Mangatepopo parking area and followed the Tongariro Alpine Crossing track (Google, Web, Images) up the Mangatepopo Valley to the saddle between Ngauruhoe and Tongariro.  The walk to this point took about 1.5 hours and traveled through several lava fields and amazing scenery.  I don’t know if they used any of this in the movies but they certainly could have as it looked exactly like what you would expect the “Mount Doom” area to look….. 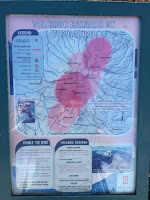 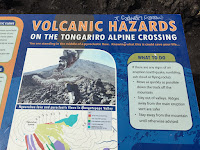 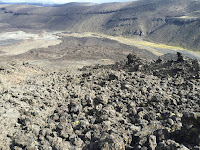 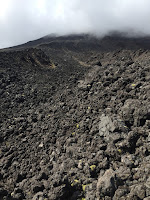 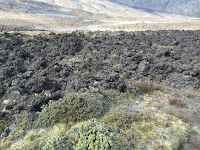 At this point the track heads to the left. Mt. Ngauruhoe is on the right although there is no “official” trail to the summit as it is a rock scramble. With the weather forecast for the day the park service warned the summit hike should not be started after 10:30.  Of course it was 11:30 by the time I reached the base of the climb and it said it was a 3 hour return. While it was very cloudy and the summit was completely covered it didn’t feel like rain so up I went.  The climb was very challenging.  With every step you took forward your feet would “spin” in the soft sandy/rocky terrain so you ended up taking 2-4 steps to gain one step of elevation.  The way I described it in my FB post was…..take a soft sandy beach, turn it on a 45 degree angle, cover it with a billion of small volcanic lava rocks and hike for 2 miles. It’s really hard to tell how steep it was….. 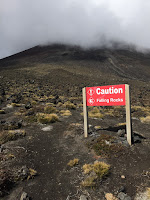 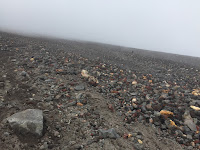 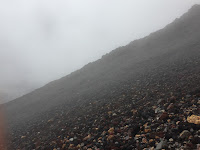 By the time I reached the rim of the volcano it was completely cloudy but what I could see was super cool (note the people in the crater and the vivid red and yellow colors at the rim)….. 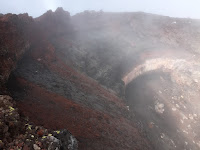 After about 30 minutes at the summit, and a brief conversation with a couple of guys (more on that later) I knew it was time to descend before I got caught in the rain….as hard as this ascent was the descent would be terrible in the rain.

Descending Mount Ngauruhoe was like no other descent I’ve ever done.  The sheer steepness and all of the lose sand and rocks made it very challenging to stay upright.  As I was climbing up I had seen several people going down who were basically “surfing” some sections of the mountain as they came down, so I figured I would try it.  If you could manage to keep your balance, keep your feet out in front of you and not hit any big rocks you could literally “surf” or “slide” down the mountain for 10′ to 20′ at a time.  Doing this where I could I managed to get down in about 30 minutes.

Once I made it back to the base I saw the 4 men I had seen at the top taking a break and we began to talk.  I asked them where they were from and they said Greymouth NZ.  I said, “I’ve been to Greymouth” and told them the story of the lost SIM card and my new friend Jon who helped me out. To my surprise one of the guys said, “Was he a big/tall guy” and I said yes. He said, “I know Jon”.  I was blown away.  It turned out that 3 of the guys knew Jon and his wife and had known them for years…..what a small world!  But I soon found out that wasn’t all we had in common.

In speaking with them I found out that they all went to the same church in Greymouth and every year their pastor (who was one of the 4) would organize a multi-day trip such as this with several of the men in the church.  How awesome is that!  Long story short, we ended up hiking together for another 1.5 hours or so and had some great conversations.  We hiked through the south crater, which I didn’t even realize was a crater because it was so huge, until we started the climb up Mount Tongariro (Google, Web, Wiki, Images)…..

NOTE: Be sure and check out the “Images” links in this blog so you can get an idea of what this area looks like when it’s not covered in clouds and you can actually see it.  It’s magnificent!

We continued to climb up the Tongariro Alpine Crossing track and finally reached the top of the ridge where the track continued to the right and the summit of the Mount Tongariro volcano was to the left. My intention was to summit the second volcano (Mount Tongariro); however, by the time we reached the top of the ridge line it was completed covered in clouds and had begun to rain….hard! 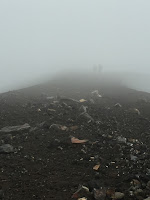 So I said goodbye to my new friends from Greymouth and watched them walk off into the clouds and I started the 2 hour hike back to the parking area.

It was raining so hard at this point that a small lake had formed by the time I made it back to the crater valley at the base of Mount Ngauruhoe.  As I waded through the water I turned and took one last look around this enormous crater/valley and headed down…. 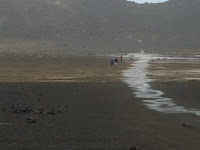 As I hiked back to the car the rain let up at times long enough for me to take a few more pictures of this beautifully rugged volcanic landscape as well as the flowering plants (further down) that came out after the rain….. 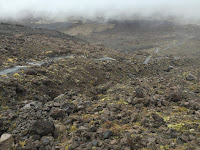 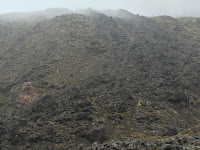 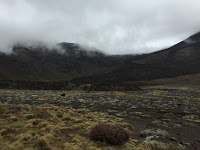 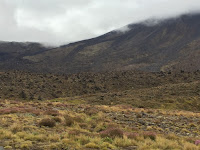 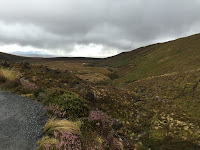 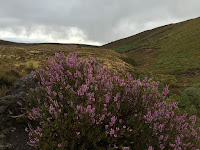 About 30 minutes from the car the sky once again opened up and it poured….and poured….and poured. 🙂  I was soaked to the bone by the time I reached the car.  So I changed clothes in the car, put all my wet clothes in a plastic bag and began the 1.5 drive to my stop for the night in Taupo.

Earlier in the day, while I was ascending Mount Ngauruhoe, I had promised myself a nice dinner if I made it to the top so when I reached Taupo I found a nice restaurant and had a delicious Orange Roughy with a tasty Monteith’s Bohemian Pilsner (a local NZ brewery)….. 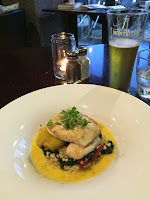 After dinner I found my Airbnb for the evening.  I had been in communication with my host during my drive and they had told me they would not be at home when I arrived but told me how to get in and to make myself at home.  So when I arrived I threw my wet clothes into the wash and threw myself into a shower.

I was lying on my bed thinking that my day was just about over when my hosts, Sheryll and David, arrived home. They invited me to sit with them at the table and have a cup of tea or coffee and we began to talk.  About 2 hours later we were still sitting there talking.  What awesome people!  We talked about everything from volcano’s and the local landscape to US politics. I thought it was awesome that I had just hiked volcano’s today and Dave was a retired volcanologist!  He told me all about the landscape of NZ and all the places he had been. He was originally from England and he and Sheryll had met while they were both living in Africa.  They were so very interesting people, very nice and so easy to talk to. Once again I found myself wishing I had more time just to get to know my hosts better. I’m just blown away at all the really interesting and super nice people I have met on this trip!  I really enjoyed talking with them and could have easily sat there all night but we finally called it around 1 AM and headed to bed.

Despite the weather it was another great day in New Zealand.