Ok, I know I’ve said this several times in other posts but my day today did begin very early….and not just my definition of early.  🙂

I woke at around 3:30 with discomfort in my right ear.  Since my last couple of dives I had the feeling of having water in my ear (and you know how annoying that is).  I tried swimmer’s ear drops, sleeping on my right side and (of course) tilting my head and pounding away (like Kramer in the private jet…who remembers that?) :-), but it was not getting any better.  And having been a diver for 16 years I kinda knew something, besides simple water in the outer ear, was going on.

I remembered passing a 24 hour clinic (Google) on my first day in Cairns and I also remembered that the lobby was packed. Knowing that I was planning to leave for the Daintree rainforest later this morning, that I would not have access to a doctor or medicine for the next 3 days and that it would probably be a 2 hour wait if I waited until later to go in I decided to get up (since I couldn’t sleep anyway) and walk to the clinic.  I arrived at the clinic at 4 only to find a piece of paper taped to the door saying, “we’re sorry for the inconvenience but due to unforeseen circumstances the doctor will not be in until 5 this morning”…ugh!  So since it was a 20 minute walk back to my place I walked down to the harbor park and sat on a park bench (in the near dark) and read some news articles on my phone for an hour.

When I walked back there were 2 older gentlemen waiting.  One had driven 2 hours to get there and the other was a very nice Aboriginal gentleman who had a problem with his foot.  I would have loved to have had some time to speak with him but we only had a couple of minutes before we were called in.

The doc did some quick tests and said that I had a “grade 1 barotrauma” to my middle ear….the most common diving related injury.  Basically I had fluids (blood) in my middle ear and it needed to drain internally (since it’s behind the eardrum).  He said it generally takes 3-10 days and asked when I needed to fly.  I said 5 days and he said, “you should be ok….come back on Monday if it’s not getting any better”.  He also said no elevations for the next few days….and I thought “there goes my mountain hikes in the Daintree”.  He gave me some tips on how to try and clear it and sent me back into the night.  🙂

When I got back to my place I dozed off and on for a couple of hours but couldn’t really sleep. So I got up ate breakfast and walked to the rental car agency in Cairns to pick up my car.  After that I drove back to my place, grabbed my bags and headed north.

The drive along the coast to Port Douglas reminded me of the Great Ocean Road southwest of Melbourne (Day 16) with the beautiful beaches, winding roads and steep drop offs into the ocean…. 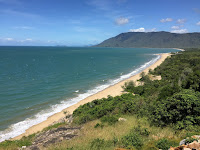 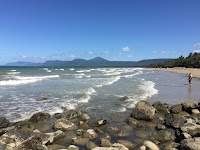 Port Douglas (Google, Images) is about an hour north of Cairns.  It’s known as a great vacation & diving destination with it’s beautiful beaches and close proximity to the Great Barrier Reef and Daintree National Park.  While I was planning my diving trip I had considered diving to/from Port Douglas rather than Cairns but I found it to be more expensive with fewer “live-on” options so I chose Cairns. However, I knew I wanted to check out Port Douglas as it seemed like a cool town…and it was. 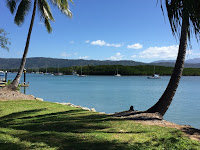 While walking around Port Douglas I also got my first good look at the mountains in Daintree…. 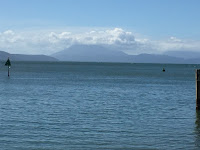 I spent a little time walking around Port Douglas and checking things out but I was anxious to get to the rainforest so I continued on. 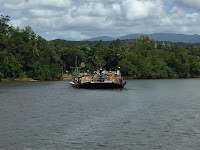 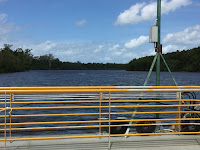 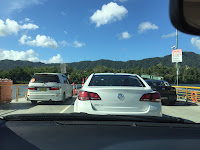 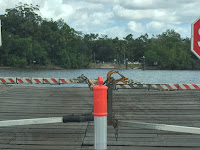 A mile or so after you cross the river you enter the Daintree National Park and begin to see the “warning signs”…. 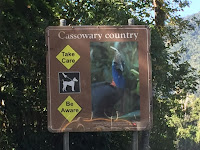 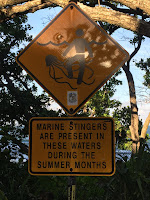 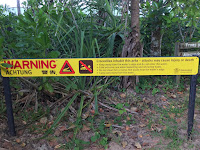 From this point the road started climbing.  Keeping in mind that I was not supposed to go higher than 300m or so for my ear I had checked the drive and thought the road all the way up the coast stayed close to the beach (sea-level) but apparently not.  Unfortunately this was the only road to the Daintree so I pressed on and hoped it was not too high.  My ear popped a few times and I felt a little pain as continued to drive and I “smacked” my gum (suggested by the doc) harder and harder. 🙂  When I reached the top I stopped for about 45 seconds to get a quick picture and scurried down the other side.  🙂 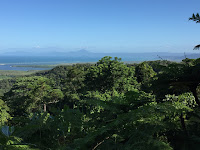 Within 15 minutes or so I reached my destination for the evening. One of the things I wanted to do was to sleep in the rainforest.  So I had booked a “room” at a place called the Daintree Crocodylus Village, which was basically several big tents on elevated platforms in the rainforest.  I checked in and took my bag to my tent. I stayed in a 4 bed tent but had the place to myself.  It was pretty cool. 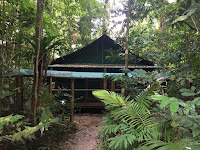 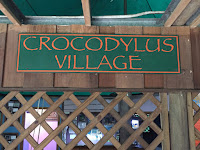 After I checked in I went down to check out the local beach…. 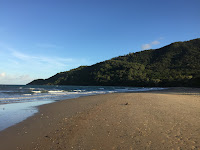 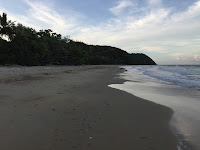 And I saw what would be the first of many signs warning you of crocodiles and to stay out of the water.  It was kind of cool and kind of scary at the same time. 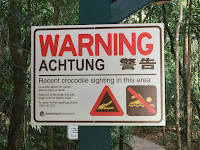 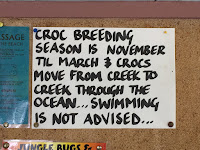 After that I went back to the “village”, made dinner, hung out in the common area and had a good conversation with the owner.  He was a former corporate guy who had all he could take of the corporate world and moved to the rainforest and opened this lodge.  Hmmm, sounds familiar (well, maybe not the moving to the rainforest part…but everything else. :-).

I saw a sign hanging in the common area that was the closest thing to a “true” weather report that I have ever seen. I wish the weather forecasters of the world would be this honest just once (ha ha)…..

After our conversation I retired to my bunk and listened to the sounds of the rainforest at night.